Corey Chivers is a partner in Weil’s Capital Markets practice and is based in New York. Corey has represented corporations, investment banks, national governments and multinational financial institutions in a wide range of public and private securities offerings, including initial public offerings, major high-yield transactions and investment grade debt offerings.

Corey is the author of the book Due Diligence in Securities Offerings (Law Journal Press 2015).

Corey is a graduate of the Columbia University School of Law, where he was named a Harlan Fiske Stone Scholar in 1989, 1990 and 1991. Prior to entering private practice, he served a federal judicial clerkship on the United States Court of Appeals for the Tenth Circuit. 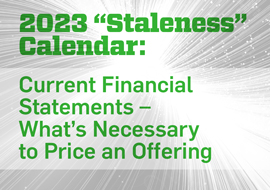 One-page guide: the latest financial statements necessary for a securities offering for each day in 2023.