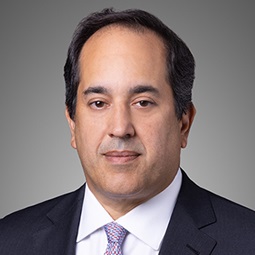 A first-chair trial lawyer, Dan has been recognized for several years as a leading white collar and investigations lawyer by Chambers USA, where clients have called him “a really talented and dynamic thinker who is very skilled in a number of areas” and “a fantastic advocate who has the ability to put the client at ease and is always on top of every detail.” He likewise has been recommended by Legal 500 US, where clients have commented: “Dan Stein is the reason we use the firm. His professional experience and him personally are the attractions.”

Dan is frequently engaged by clients facing high-stakes investigations in headline matters. For example, he served as lead trial counsel for an engineering firm ensnared in the Flint Water Crisis, advised a global financial institution in connection with the investigation conducted by Special Counsel Robert Mueller, and defended an individual charged in connection with the Varsity Blues college admissions scandal.  Dan previously served for a decade in the U.S. Attorney’s Office for the Southern District of New York (S.D.N.Y.), with two terms of duty. Most recently, he was Chief of the S.D.N.Y.’s Criminal Division, where he oversaw all of the S.D.N.Y.’s criminal prosecutions and investigations, including those involving securities fraud, insider trading, public corruption, foreign corrupt practices, criminal tax offenses, money laundering, economic sanctions, cybercrime, narcotics trafficking, violent crimes, and terrorism. He assumed that position in July 2015, after serving as Chief Counsel to the U.S. Attorney since July 2014.

Earlier in his career, Dan was an assistant U.S. attorney in the S.D.N.Y., where he investigated and prosecuted cases involving a wide range of federal crimes, including those involving companies in the financial services industry. In this role, he represented the United States in several significant criminal public corruption cases. From 2009 to 2011, he served as chief of the office’s Public Corruption Unit, where he was the principal trial counsel in more than a dozen criminal trials and argued numerous appeals in the U.S. Court of Appeals for the Second Circuit.

Between stints in the S.D.N.Y., Dan spent several years as a partner in private practice, where he handled criminal and regulatory matters for a number of major financial institutions and other companies.

Immediately prior to joining Weil, Dan was a partner at another international firm, where he served as a co-leader of the White Collar Defense & Compliance group.

Earlier in his career, Dan clerked for the Honorable Leonard B. Sand of the United States District Court for the Southern District of New York.