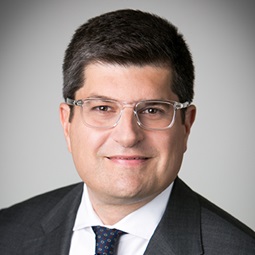 Benjamin has served as lead counsel in copyright, trademark, music licensing, misappropriation, and media law cases for clients such as Getty Images, Sirius XM, Pandora Media, S&P Global and its S&P Dow Jones Indices division, Houghton Mifflin Harcourt, the North American Concert Promoters Association, The Spectator, and West Publishing, among others. For many years, he has represented the Association of American Publishers on a wide variety of matters, including those involving intellectual property, First Amendment, and antitrust issues, among others. Benjamin also frequently represents music users such as television stations, television networks, and web site operators in connection with the acquisition of, and litigation over, rights to publicly perform musical compositions and secondary liability for performances by others.

Benjamin has been widely recognized for his work. In 2022, for the second consecutive year, Billboard magazine named him as one of the top music lawyers in the country, and National Law Journal honored him as one of its national “Trailblazers” in the Sports, Gaming, and Entertainment fields. In 2021, Law360 ranked Benjamin as one of its five “MVPs” nationwide for Media & Entertainment, and The American Lawyer Litigation Daily honored him with its coveted “Litigator of the Week” award for his Second Circuit win referenced above on behalf of Getty Images. He is currently ranked by Chambers USA as a leading lawyer for Intellectual Property: Trademark, Copyright and Trade Secrets and for Media & Entertainment: Litigation, where clients have praised him for his “deep industry knowledge,” and his “decades of experience as a music and copyright litigator.” Commentators also have touted his “deep expertise in IP law,” named him “one of the best lawyers in the music business,” and called him “an excellent litigator” who “gives practical and thoughtful advice.” Benjamin is also highly ranked by Legal 500 for IP: Copyright, Trademark Litigation, and Media & Entertainment Litigation, where commentators have called him “excellent” and have noted that he is “practical and really knows his stuff," and by World Trademark Review’s WTR 1000 as a “Trademark Star.”

Benjamin is an Adjunct Professor at New York University School of Law and serves on the Advisory Board of NYU’s Engelberg Center on Innovation Law & Policy. He previously taught at the University of Pennsylvania Law School. Benjamin has published numerous book chapters and articles on copyright, trademark, media and entertainment law and is a frequent speaker on those issues.

In addition to serving as the Head of Weil’s IP/Media Litigation practice, Benjamin is the Global Co-Chair of Weil’s Pro Bono Committee and oversees the Firm’s pro bono efforts worldwide. 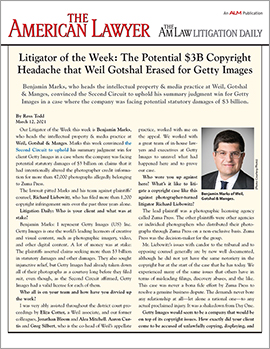