Britta Grauke is Co-Managing Partner of Weil’s German offices and heads the German Litigation Practice, which she has helped build since joining Weil almost two decades ago. She is widely recognized for representing international clients in litigation in Germany and abroad, and is described by Chambers Global as having an excellent track record in these proceedings. Her practice spans issues relating to corporate law, capital markets, competition, IP law and disputes arising from M&A transactions. Britta is also well-known for her skill in advising clients in compliance issues and crisis management. Through her work in insolvency-related litigation and assistance to creditors, sponsors, investors and managing directors in highly contested crisis situations, she has become a well-known advisor in German and international restructuring situations.

Britta is an active leader in numerous diversity initiatives, such as the Women@Weil affinity group, and serves as Co-Chair of TOWER, the Firm’s Taskforce on Women’s Engagement & Retention. In this effort, Britta guides a committee of women and men who are focused on the advancement and development of female attorneys globally. TOWER’s efforts have helped further the involvement of women in Weil’s business development and client relationship initiatives, leading to increased female participation in client pitches by nearly 70% over four years. This achievement earned Weil “Highly Commended” recognition in the 2019 Financial Times North America Innovative Lawyers report. 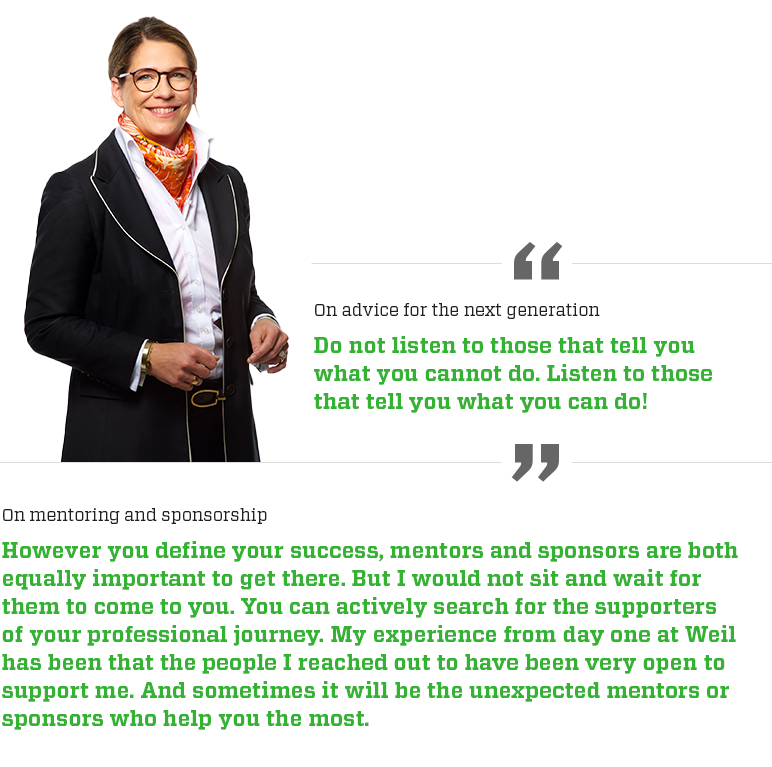 Courtney S. Marcus is one of the foremost banking and finance attorneys in the industry. She represents private equity firms and consortia, public and private corporate borrowers, and financial investors in connection with a wide variety of financing transactions. As Co-Managing Partner of Weil’s Dallas Office, she has contributed to Weil’s culture, its growth and its standing among the world’s elite firms. Her numerous professional achievements, outstanding leadership skills and steadfast community involvement have led to her status as a role model for future generations of female lawyers.

She has played a decisive role in financings for industry-shaping acquisitions by major corporations as well as leading private equity firms, and handled linchpin transactions in some of the largest restructurings in recent years. She has represented clients such as Centerbridge Partners, AMC Entertainment, WPX Energy, Willis Towers Watson, Basic Energy Services, Fieldwood Energy, KIK Custom Products and Goldman Sachs, among many others.

Mindy J. Spector is General Counsel of Weil and a partner in the Firm. Prior to becoming General Counsel, she chaired the Firm’s Complex Commercial Litigation Group. She is an experienced trial attorney who has zealously and successfully represented dozens of Fortune 500 companies during the course of her career. She plays an imperative role in Weil’s leadership, not only as the Firm’s General Counsel, but also as the chair of the Firm’s Nominating Committee, which conducts due diligence on partner candidates and nominates members of the Firm’s Management Committee. She has also played an important role in the development of Weil’s associate programs. As a senior leader with unparalleled professional achievements, Mindy serves as a role model and mentor for countless men and women within Weil and the greater legal community.

With more than 30 years of experience, Diane Sullivan is a veteran trial lawyer who is repeatedly recognized as one of the leading trial lawyers in the country for securing victories in high-stakes trials across a wide range of practice areas and industries. As one of the few female trial lawyers who have reached this level of visibility and prominence, Diane has made an indelible impact on the profession. She has served as a trailblazer and role model for future generations of female trial lawyers, taking on some of the toughest cases, against some of the best trial lawyers in the country in often the most hostile of jurisdictions.

The American Lawyer described Diane by saying she “isn’t a hired gun; she’s more like a hired bazooka repeatedly parachuting into high-stakes cases leading up to trial and securing victories.” Diane has secured victories for clients such as Johnson & Johnson, GE, ESPN, Merck, Philip Morris USA, Procter & Gamble, Sanofi, Baxter Healthcare Company and AstraZeneca, among many others.

Liz Weiswasser is Co-Chair of the Litigation Department, Co-Head of Weil’s global Patent Litigation practice and also Co-Head of Weil’s Life Sciences practice. She is part of a select group of leading female attorneys in the United States who serve in a similar capacity at their respective firms. Liz has dedicated her career to litigating patent cases involving cutting-edge biological and pharmaceutical technologies, and has been widely recognized by clients and her peers as a leader in the life sciences field. She is repeatedly turned to by many of the biggest and most innovative companies across the biologic, pharmaceutical and medical device sectors to lead their most important cases.

Passionate about the importance of mentoring, Liz is a widely respected colleague and mentor on her teams at Weil, in her community, and in the legal and academic fields more broadly. She is a core contributor to legal education and scholarship in the life sciences, patent law and litigation space, as well as a leader in pro bono work and public service. Through her many contributions to Weil and beyond, she has helped shape the careers of countless lawyers who look to her as a role model.

View the latest news on our many women leaders.