Patent Litigation and Life Sciences practices Co-Head Edward Reines has been named among the “Top 100 Lawyers” in California for 2022 by the Daily Journal.

Edward was profiled by the publication, which noted that he took five separate patent or patent-related cases before juries between July 2021 and May 2022, winning verdicts in three and securing a favorable settlement in another.

The publication underscored his $45 million verdict for CareDx, in which a jury found that Natera willfully engaged in false advertising in the promotion of its kidney transplant rejection assessment test. The Daily Journal reported that the decision is believed to be the largest Lanham Act false advertising verdict in a case brought by a private party.

“It’s nice to clean up the market of essentially false information,” Edward told the publication.

The Daily Journal also highlighted his jury trial wins for Illumina, Inc. and ArcherDX LLC, and a trial in which he represented Harvard University, the University of Chicago, Livermore Labs and Bio-Rad Laboratories that settled halfway through.

This is the second consecutive year in which the Daily Journal has honored Edward with this award, and follows his earlier recognition by the publication as one of the 2022 “Top IP Lawyers” in California. 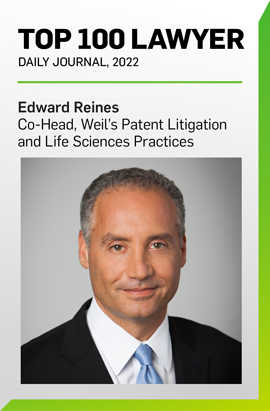