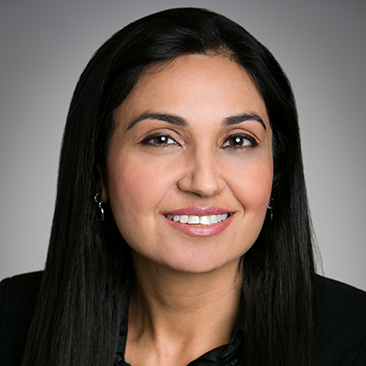 Ms. Sandhu is consistently recognized by Chambers USA as a leading lawyer for Technology & Outsourcing in New York, where clients praise her for her "practical and extremely knowledgeable" approach to IP and technology transactions and her “ability to get deals done and to understand the issues and their place in the wider corporate context.” She is recommended for Patents: Licensing and has been recommended for Technology Transactions by Legal 500 US. She is also recognized by IAM Licensing 250’s “World’s Leading Patent & Technology Licensing Lawyers;” named a “Global Leader” in New York by IAM Global Leaders; and “Highly Recommended” by IAM Patent 1000, where she is described as an “amazing lawyer and an outstanding drafter. She is great at building relationships with counterparties.” She is also recognized as an “IP Star” for IP Transactions and Trademarks by Managing Intellectual Property and as a Financial & Corporate Life Science Star by LMG Life Sciences Guide. Ms. Sandhu was named among the 2019 “Notable Women in Law” by Crain’s New York Business; named Minority Female Lawyer of the Year at the Chambers USA 2018 Women in Law Awards; named among the 2015 “Top Women” for Intellectual Property in New York by Super Lawyers; and shortlisted in the “Best in Technology” category at Euromoney Legal Media Group’s Americas Women in Business Law Awards in 2016.

Ms. Sandhu is a member of the Firm’s Diversity Committee. She is also actively involved with the Firm’s pro bono efforts and regularly represents Kids in Need of Defense. Ms. Sandhu was inducted into the YWCA’s Academy of Women Leaders for her outstanding professional achievement, civic commitment and leadership. She was also featured in Profiles in Diversity Journal’s 11th Annual WomenWorthWatching® issue.