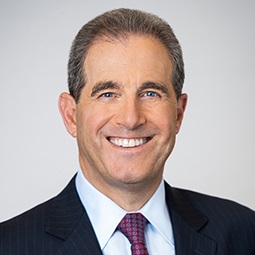 Barry Wolf is Weil’s Executive Partner and is Chair of the Firm’s Management Committee.

Barry regularly represents a number of private investment funds and their sponsors in their organization and operation. His clients include Lindsay Goldberg, American Securities, Genstar Capital, Snow Phipps and The Gores Group. Barry has extensive experience representing institutional investors in investing in private equity funds, providing both commercial advice as well as tax advice.

In 2021, Barry was named to the Law Power 100, City & State’s list of the most influential attorneys in New York. In 2019, Barry was recognized as a Distinguished Leader by the New York Law Journal’s Professional Excellence Awards. In 2018, the Financial Times’ North America Innovative Lawyers report named Barry as one of ten legal innovators. He also has been recognized as a leading private equity lawyer by Practical Law Company in Global Counsel and is recognized as an “Eminent Practitioner” for Fund Formation by Chambers Global and Chambers USA, where “[he] is regarded as an ‘absolute star, with searing intelligence.’ A frequent adviser to private equity firms and their sponsors, he tends to get involved at the early stages of structuring and has the additional benefit of a background in tax law. He combines his management role with an active workload.” Barry has been named a “Best Lawyer” for Private Funds in New York by Best Lawyers in America and recognized as a “Highly Regarded” lawyer for Investment Funds in the U.S. by IFLR1000. In 2013, Barry was named to Private Equity Manager magazine’s “Legal Power 30” list of the 30 most influential private equity lawyers in the industry today. Barry was also named one of America’s “Top 25 Pre-Eminent Private Equity Lawyers” by The Best of the Best USA 2010.

In 2019, Barry was presented with the Outstanding Ally award at the Chambers Diversity and Inclusion Awards. He was honored for his dedication to myriad efforts to increase diversity and inclusion at Weil, such as through the Firm’s ally-initiative Upstander@Weil, as well as for his own involvement in multiple mentoring circles and promotion of innovative diversity trainings.

Barry is very active in a range of philanthropic activities, including through board positions with: Weill Cornell Medicine, the Central Park Conservancy and the Global Foundation for Eating Disorders.