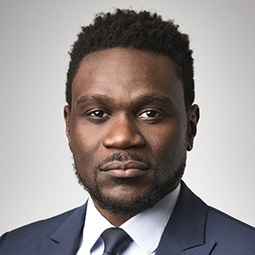 Bambo Obaro is a partner in Weil’s Complex Commercial Litigation practice. Bambo has over a decade of experience litigating a wide array of commercial issues and disputes in state and federal courts, as well as arbitration proceedings. He has extensive experience at the trial and appellate levels in matters involving consumer class actions, alleged violations of state deceptive trade practice acts, product liability, breach of contract, employment disputes, and securities fraud.

Bambo also focuses much of his practice on employee mobility and trade secrets related issues, including advising clients on non-compete agreements, developing programs for protecting trade secrets and managing risks, and litigating trade secret disputes in state and federal courts throughout the country. Bambo also has significant experience obtaining and defending against emergency remedies such as temporary restraining orders and preliminary injunctions to address trade secret misappropriation.

Bambo is actively engaged in professional, community, and bar organizations, boards, and committees in and out of the Firm. He currently serves as Co-Chair of the Lawyer Representatives to the Ninth Circuit Judicial Council. Bambo is also actively involved in the ABA and serves as co-chair of the Litigation Management Subcommittee of the ABA Section of Litigation Corporate Counsel Committee and as co-chair of the ABA’s 2020 Corporate Counsel CLE Seminar. Bambo also serves on the Board of Governors for The University of San Francisco School of Law, from which he received his J.D. in 2009, and on the Board of Larkin Street Youth Services, which is a nonprofit serving homeless youth in the San Francisco Bay Area.

In 2021 and 2022, Bambo was named by Benchmark Litigation to its “40 & Under Hot List,” which recognizes the nation’s “top emerging talent” in the U.S. In 2020, Bambo was selected as one of the Daily Journal’s Top 40 Under 40 in recognition of his expertise in high-stakes litigation and leadership in the legal community. He is also recognized as a Next Generation lawyer for Trade Secrets and a Recommended Lawyer for Product Liability by Legal 500.

Some of Bambo’s representative experience includes: 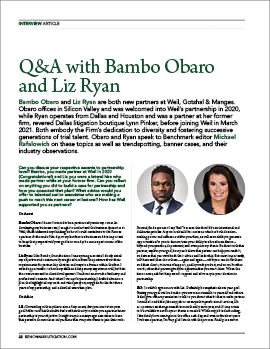