Weil was recently profiled by Law360 as a 2018 nationwide Trials “Practice Group of the Year” for securing several high-profile trial wins across disciplines and in disputes with billions of dollars in combined potential liabilities on the line.

The profile highlighted the Firm’s recent trial win for Johnson & Johnson in the talc mass tort in New Jersey state court. The article highlights the successful tactics used by Weil’s team, led by Diane Sullivan and Allison Brown. Ms. Sullivan explained that the team looked at what had been done in earlier trials and then “changed up the strategy a little bit in a way that was showing the jury right off the bat how the plaintiffs' lawyers were misleading the jurors about the company documents, cherry-picking, putting things out of context, not telling the whole story.”

Law360 also highlighted Weil’s win for C&S Wholesale Grocers. The Weil team, led by David Lender and Eric Hochstadt, secured a complete defense jury verdictfor the client following nine days of trial in an antitrust class action in Minnesota federal court. Mr. Lender explained the significance of the case: “Class action antitrust cases do not go to trial, and the reason is the stakes are way too high. If you lose, there's automatic trebling,” he said.

In addition, the profile mentioned Weil’s role in securing a jury trial verdict for client Illumina in a high-profile patent infringement dispute with Ariosa Diagnostics. The verdict marked the culmination of six years of litigation involving the invention of a revolutionary Down syndrome blood test that is replacing the invasive and risky traditional amniocentesis test. 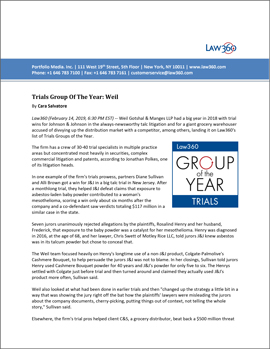