In 2016, Weil was brought in as lead trial counsel following the certification of classes of more than 300 retail grocers. Plaintiffs, which were represented by class counsel led by Boies Schiller, alleged that New England-based C&S and Supervalu, another leading wholesaler based in the Midwest, entered into a conspiracy to allocate the New England and Midwest territories between themselves for a period of five years, resulting in inflated grocery prices. The other defendant settled before trial.

After a two-week trial and less than an hour of deliberations, the jury returned a complete defense verdict for our client, finding no conspiracy. 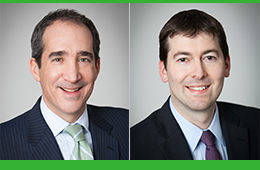 David Lender and Eric Hochstadt Named Litigators of the Week