Britta Grauke, Co-Managing Partner of Weil’s German offices, discussed with Law.com International the swift and vital assistance she and her family, along with Weil’s German team, have provided to Ukrainian refugees who fled to Germany.

Since the start of Russia’s war with Ukraine, Britta has been instrumental in providing critical shelter and day-to-day essentials to nine Ukrainian refugees, including women and children. Britta and her family initially welcomed a Ukrainian family of three into their home, and shortly thereafter Britta received an emergency call seeking housing for more families. Britta, with help from the Weil team in Germany, quickly worked to secure and make two other vacant apartments in her hometown of Wiesbaden move-in ready to house two more Ukrainian families of three. The Weil team helped by collecting furniture, electronics and home decor items for the apartments, as well as by donating money to the families to help them purchase much needed essential and personal items. With the urgent help of the Weil team, both apartments were made ready for occupancy within one day of Britta getting the call.

Thanks to the outpouring of support spearheaded by Britta, the first family she housed has since been able to move on and connect with family members in Germany, while the other two families are now adapting to a new life in Wiesbaden. With the continued support of Britta and her family, the women of the two families have enrolled in German language courses organized by Britta’s friends and the children have begun attending a nearby primary school. Britta also continues to care for the families and assist them in everyday life in Germany, including celebrating Ukrainian Easter together.

“We didn’t realize how intense and touching it would be to help these refugees in their hour of need,” Britta said. “Bringing their stories, and the horror of the war, into my home has been enormously moving for my family and me.” She added, “I would happily do this again if there is a need.” 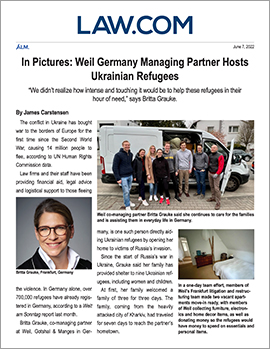