Restructuring partner Kevin Bostel has been named one of Law360’s “Rising Stars” for Bankruptcy in recognition of his expertise and accomplishments advising on complex restructurings.

Law360 profiled Kevin, one of just five Bankruptcy honorees nationwide, noting his work advising NPC International, Inc., the largest restaurant franchisee in the U.S. at the time of its bankruptcy filing in July 2020, and CHC Group Ltd., a global helicopter service provider with more than $1.5 billion of debt in a case with domestic and foreign operations.

He said CHC has been the biggest case of his career and was an opportunity for him to take the lead on a matter.

"It was a time where I was given a lot of leadership in a case that, in my view, allowed me to propel my career here at Weil," Kevin told Law360. "It showed me how much coordination and planning needs to go into a large filing that nobody else sees when it hits the press and you see a smooth first-day hearing.”

Kevin said the NPC case was his most interesting recent case. Though foot traffic business for the company, which owned 1,600 Pizza Hut and Wendy’s restaurants, suffered due to COVID, it began to rebound when "pizza became the food of choice during the pandemic," according to Kevin.

"We ended up, because of the performance they had during the pandemic, completing one of the largest franchise sales in the United States, ever. We were able to sell almost the entire business with minimal restaurant closures," Kevin told the publication.

Law360 also highlighted what Kevin called his proudest moment as an attorney, a pro bono matter in which he resolved a family’s complex guardianship proceeding.

"I got a sense of how daunting the legal system can be for a lot of people," he said. "It made me appreciate how much having an advocate can mean for some people.” 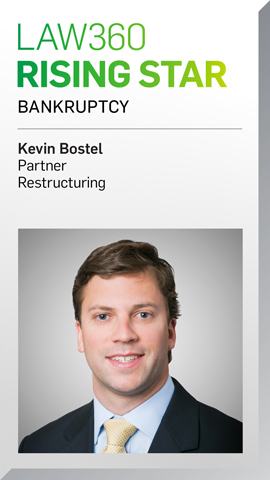