Each year, this special event recognizes the outstanding contributions and achievements of those who have given so much to help New York City heal, and to reinforce the organization’s mission to honor the victims and educate future generations. Ira has long served as a dedicated member of the Museum’s Board of Trustees and co-chair of its Governance Committee.

Ira played a key role in brokering the 2012 deal between the Port Authority of New York and New Jersey and the nonprofit World Trade Center Memorial Foundation that provided the financing needed to complete construction at Ground Zero. “I don't know where private practice ends and public service begins," Ira told The New York Times when he first agreed to join the foundation’s Board.

The 9/11 Memorial & Museum bears solemn witness to the terrorist attacks of September 11, 2001 and February 26, 1993. Respecting this site made sacred through loss, the Memorial and Museum remembers and honors the nearly 3,000 victims of these attacks and those who risked their lives to save others. It further recognizes the thousands who survived and all who manifested extraordinary compassion and leadership in the wake of the attacks. 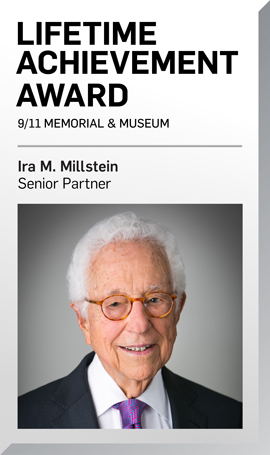