Restructuring partner Kelly DiBlasi has been named one of the “Outstanding Restructuring Lawyers” of 2022 by Turnarounds & Workouts. The annual report features 15 lawyers throughout the United States who have worked on the year’s most significant and successful restructurings.

Kelly was recognized for her achievements on the debtor and creditor side in an array of prominent restructurings. The profile highlighted Kelly’s work advising Scandinavian Airlines System and affiliates in their chapter 11 cases, an ad hoc group of secured lenders in the prenegotiated chapter 11 filing of Nordic Aviation Capital, and Norwegian Air Shuttle ASA and its affiliate, Arctic Aviation Assets DAC, in their chapter 15 cases.

She also was recognized for advising National Public Finance Guarantee Corporation, a municipal insurer, in connection with its $3.2 billion exposure to the Commonwealth of Puerto Rico and certain of its instrumentalities in the largest municipal bankruptcy in U.S. history. The matter involves some $74 billion in public sector debt.

Turnarounds & Workouts named the outstanding restructuring lawyers in a special report in the December 2022 issue. 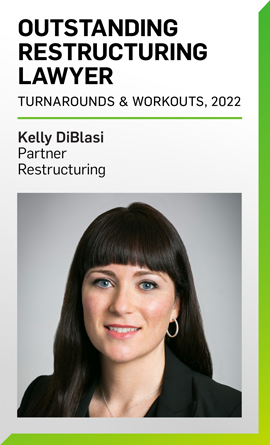