The Power of Purpose

Nichole Hines joined Weil in 2007, after graduating Duke Law and right as the Great Financial Crisis began unfolding. Within a year, she was working on some of the hottest cases in the field, from SEC investigations, to shareholder actions, to bankruptcies, to mega-bank mergers like the Wachovia-Wells Fargo deal.

Hines said that working in securities litigation with some of the leading lights in the field, including her mentors Richard Levine and Irwin Warren, was a “fantastic” opportunity.

In particular, she lightheartedly mused that she initially perceived Warren as an intimidating figure, but “exceptionally brilliant” in her words. Even as he was “highly meticulous,” he also encouraged her to be creative in how she approached her work. Hines recalled a project, assigned by Warren, to prepare a memo and case binder: “One of the things Irwin would often say to me was, ‘Make sure you don’t just think in a linear pattern,’” she said. “That made me stop and think more creatively in terms of drafting memos, information gathering, and presenting materials.”

The lessons stuck with her, and Hines fondly recalls how her creativity and meticulousness led to many opportunities. In one case, she sat at the counselor’s table while serving as Warren’s deputy, in connection with a bondholder suit challenging General Motors’ bankruptcy filing in the United States Bankruptcy Court for the Southern District of New York.

“Some of my best memories are actually going downtown with Irwin, and sitting in a small room with about 10 gentlemen as part of an SEC investigation,” she said. “Me being the only female, a young African-American female at that. Sitting next to him as the holder of the documents and his deputy, because I knew the details of those deals inside and out.”

Yet, in the context of a life path, the success and kudos were not quite enough. “I knew that my true passion was not to be a securities litigator,” she confessed. 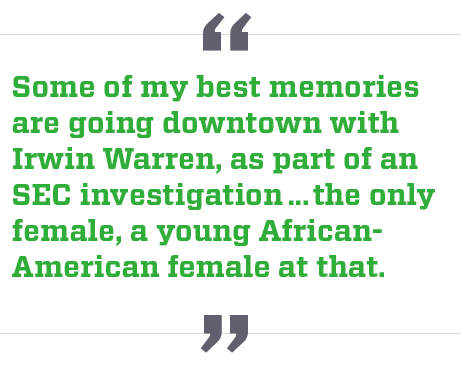 Hines had always envisioned herself becoming a great “general attorney,” and then applying those skills to the healthcare field. When she was a young child, she was always curious about why she saw other young children on television, who were terribly thin and unable to access food, water, or medicine.

She recalled thinking, “Surely it couldn’t be that there was insufficient food, water, or medicine in the world.” Later she concluded that the issue was accessibility, and as her educational and career path developed, she very much wanted to address that.

“You really have to look inside yourself to figure out, What is my journey? What is my mission? What is my purpose here? How do I get there?” she explained.

To further that mission, Hines left Weil to earn an LL.M. in Global Health Law and International Institutions from Georgetown Law. Through the program, Hines spent more than a year in Geneva, Switzerland, learning how international institutions, such as the World Health Organization and World Trade Organization, influence population health, particularly as it relates to costs and access barriers in the pharmaceutical industry.

That experience helped her land a role at Eli Lilly and Company, specifically addressing those questions on a global scale. But to make the biggest impact, Hines quickly realized that she’d have to go in-house at a healthcare company. First, she sharpened her industry knowledge with a Miami-based law firm, and then was hired in-house by her client, Humana Inc.

“Though I’m not working directly with international populations at the moment, I started my career at Humana specifically in the Medicaid world,” Hines said. “It’s a healthcare space that just keeps expanding.” Medicaid now accounts for about 17% of U.S. healthcare spending and covers approximately 70 million people, 40% of whom are children.

Her role quickly expanded to include Medicare Advantage, which was designed to help vulnerable seniors and people with disability access cost-effective, quality healthcare—and avoid catastrophic costs that could result in personal financial ruin. Now, Hines provides transactional and regulatory support for all lines of business in Florida (the state with Humana’s largest percentage of covered members) and for Puerto Rico.

The Next Chapter In A Lifelong Mission

“Understanding the relationship between securities and the healthcare industry is integral to answering questions about how we can afford healthcare without going into financial ruin,” she insists. “Oftentimes, managing care through private markets is the solution, particularly in the U.S. But that leaves some people without access to the healthcare system. What I do in my current role at Humana is to find solutions to that issue, specifically from a healthcare finance perspective.”

It’s a role that leverages her skills in securities law to support a lifelong mission of helping people. It also requires knowing the ins-and-outs of the business—in order to give sound advice, based on deep knowledge of the company’s challenges. Moreover it means engaging with people that one sometimes cannot connect with immediately, but working together toward answers.

“I have this experience on a daily basis, particularly with doctors,” she explained. “Lawyers and doctors can have completely different perspectives and different missions at times, and yet, we’re both trying to do the right thing. Coming up with solutions takes collaboration and a willingness to listen.”

That ability to listen, according to Hines, is one of the hallmarks of a great leader. The other hallmarks? Purpose and passion.

She concluded: “When I think of a great leader, I think of someone who feels purpose and passion and understands that even if every day is not glamorous, it’s putting you on track to be able to contribute in a meaningful and powerful way – for me, that’s on a global healthcare stage.”