Building Your Dream Career, After the Law

Chris Smith (‘04/Lon/Corp), Partner at venture firm Playfair Capital, believes that the key ingredients are hard work, finding something you enjoy, and taking the long view.

After joining Weil’s London office in 2005 as a trainee associate, Chris Smith worked his way through the Litigation, IP  and Corporate Departments. Then he took a six-month secondment to Silicon Valley as part of the Litigation team. That trip would change his life: leading him to a career sojourn on the Isle of Man, before returning to London as Managing Partner for Playfair Capital, a venture capital seed fund that has invested in dozens of start-up companies across 11 countries.

In the near term, after returning from California, Smith’s law career stayed on track. He qualified  in September 2007, joined Weil’s Corporate team, and remained at the Firm until 2013.

“When I was studying law at University College London (UCL), I read an article about the U.S. law firm invasion, and I remember thinking that U.S. firms took a very different approach compared to U.K. firms,” Smith said. “They were a bit more commercial, with smaller teams, and that model stuck with me throughout my studies.”

He also remembers that Weil seemed to be on a mission. “They were here to build out the best practice in the City,” Smith said. “Through my internship, I met people like Mike Francies and Barry Fishley, and immediately I wanted to join that team. Weil was also offering rounded commercial advice, advising clients on how to get a deal or transaction done. We were allowed to be commercial. I think that’s the reason I stayed so long because it’s the most entrepreneurial you can be while being a lawyer.”

As a full-service firm, Weil had a range of choices for trainees in the London office. After qualifying, Smith had planned on doing some transactional IP, and perhaps some corporate work with Barry Fishley. But Mike Francies pulled him aside one day and said, “Chris, if you want to play in the Big Leagues, you’ve got to do Private Equity.”

“I wasn’t sure if he was asking or telling,” Smith said. “But it didn’t really matter. It was really helpful and very flattering to have the Managing Partner take that much interest in your career. That’s what you’d hope for.”

Smith said the enormous level of responsibility he was given is one of the things he loved most about Weil – even if that meant getting emails from Mike Francies at 11 p.m. about a pending deal, with no instructions. “Sometimes you might not know right away whether you were acting for the buyer or the seller,” Smith said. “You just got over it and did the deal. It’s that level of responsibility that just makes you want to step up. It helps you learn to grow.” 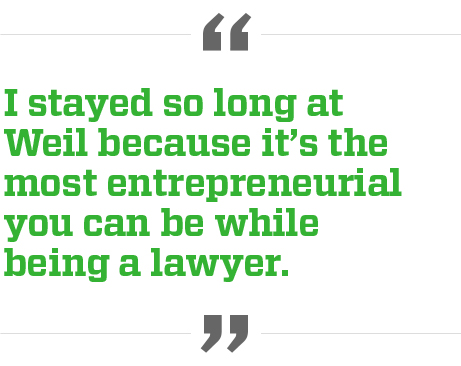 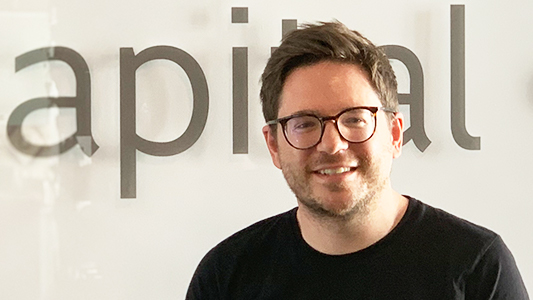 Career Mantra: Find Something You Enjoy

It was a secondment to Silicon Valley that kicked Smith’s professional growth into high gear. He’d go for lunch to a bagel café that happened to be a favored haunt for big players in the venture capital (VC) industry. There in the heart of Silicon Valley, pitch meetings were happening all around him, and it reignited his interest in building businesses.

As soon as he got back to London in 2008, Smith made his first angel investment – the first of 14 angel investments he’d make in the U.K. and U.S. over the next ten years.

“Weil was instrumental in sowing the seeds of what I’m actually doing now,” Smith said. “I always had the entrepreneurial itch. At UCL, I set up and built a telecoms business for discounted international calling. That gave me a taste of the business side. So after spending time in Silicon Valley, I started looking at start-up companies, using some of the skills I learned at Weil, and a bit of what I’d learned on my own through my telecoms business, plus doing a lot of reading and research, and following my gut.”

That first investment, in a burrito company, gave way to a more B2B technology-focused strategy. Smith quickly learned that food and beverages was a tough space that doesn’t scale very effectively, and is very capital intensive. By contrast, B2B software technology can scale at a much lower cost. “I started investing via websites like Angel List, and I built a network through LinkedIn and talking to people,” he said. “I found that the angel investment community is actually very open. So you can just reach out to them and join them and you can start looking at deals.”

Smith didn’t know at the time that angel investing would dovetail so well with his business background and legal experience – all combining to lead him into the world of VC investing. “I didn’t have that level of foresight,” he said. “But I knew that if I did what I enjoyed, and worked hard at it, hopefully the outcome would be positive.”

The Choice: Gear Up Your Lifestyle, or Your Career

Smith started his investing career just as the global recession hit in 2008. He had always planned on staying at Weil for three to four years, to get up the legal learning curve. But after three years with the Firm, the economic crash made leaving more difficult, though it did present huge opportunities to do restructuring work. So he stayed on until 2013.

“Learning restructuring added another string to my bow in terms of technical skills,” Smith said. “It kept us busy, kept us employed, and to the credit of Mike Francies and the management team we had no redundancies. But then at the end of the recession, which lasted a few years, it was time to move on.”

Smith credits his own prudence for putting him in a position where he actually could move on.

“The great thing about working at a law firm is the annual salary increases that you get almost nowhere else,” he said. “The temptation is to gear up your lifestyle. But if you’re going to make a big career move, you’re going to have to avoid that temptation so you can be ready when the time comes.”

That means taking a long-term view, according to Smith, forgoing potential lifestyle upgrades and accepting that you might have to take a salary cut when leaving the legal profession. “Going to work in-house with a hedge fund can make you tons more money, compared to a law firm, but that’s quite rare,” Smith said. “If you’re looking to leave legal work because you have a real entrepreneurial itch, or you want to do something completely different, the likelihood is more that you’ll have to withstand a pay cut.”

For some, that prospect may seem daunting. But for Smith, it’s a given that enjoyment is much more important than status or money. “In your career you want to optimize for happiness,” Smith said. “You don’t optimize for every single dollar. You want to do something meaningful. Our careers are long. We put a lot of work into them. So try to do something that you really enjoy.”

Take Opportunities Where You Find Them

“To find success, you’ve got to work really hard, which is something that Weil definitely gives you,” Smith emphasized. “After Weil, you’ll be the hardest-working person wherever you go, guaranteed. But also, once you find something you enjoy, grab opportunities that come your way.”

Smith’s first opportunity after Weil was on the Isle of Man, at a family office that was hiring lawyers to become investment managers. Smith jumped at the chance, and within four months he’d been put in charge of building out and running a sales team at one of the firm’s portfolios companies: a business telecom company operating through a network of resellers in the U.K. After that he was put in charge of 12 in-house software developers on the Isle of Man, as well as a half-million-dollar project outsourced to a company in Belarus. He also did some M&A work. His four and a half years on the Isle went by in a flash.

“Everyone thought I was crazy,” Smith said. “It felt like quite a high-risk move. If it hadn’t worked out, I’d be a lawyer who went off and failed at business. But now I think, what was there actually to lose? When I was on the Isle of Man, no one had any idea what I did, and no one cared whatsoever.”

Through a VC-jobs email list, Smith heard about a VC firm, Playfair Capital, looking to hire a partner. He knew right away that it was the kind of opportunity he’d always wanted, and he started talking to Playfair several months before he joined. He spent time working with them, doing some deals together, each side getting comfortable that it was going to work out. He joined the firm as lead manager on the firm’s newest investment fund, which invests in early-stage tech businesses predominantly in the U.K., and in 2019 he was made Managing Partner.

Aside from his executive work running Playfair, he assists portfolio companies (as a Board member) on big issues like fundraising, staffing and strategy. He also wants to level the VC playing field by dismantling the old-boy network and opening the doors to all kinds of entrepreneurs, especially women founders and other under-represented groups.

“Right now, workwise, this is awesome,” he said. “You’re always learning something new, because every day new founders are coming in pitching new ideas. It’s so much fun, it’s not the kind of place or role I can ever imagine outgrowing.”