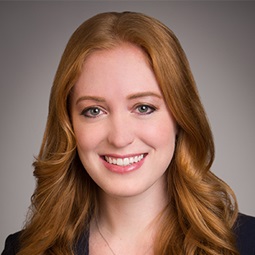 Kayleigh D. Golish is an associate in Weil’s Antitrust Practice Group, where she focuses on the representation of clients in various antitrust matters, including criminal and complex civil antitrust litigations, government and internal investigations, and mergers and acquisitions. She currently serves on Weil teams representing Bridgestone Corporation and Calsonic Kansei (now known as Marelli) and their U.S. subsidiaries in one of the largest private antitrust class actions in history in In re Automotive Parts.

Prior to joining Weil, Kayleigh served as a law clerk on Senator Dianne Feinstein’s Senate Judiciary Committee staff and as a law clerk at the headquarters of Service Employees International Union in Washington, D.C. Kayleigh received her J.D. from Georgetown University Law Center where she served as a Symposium Editor on the Journal of National Security Law and Policy for two years. At GULC, Kayleigh also monitored federal security and immigration policies and advocated for changes of federal and administrative policy directed towards women and children impacted by and fleeing from violence in Central American countries with her service in the Federal Legislation and Administrative Law Clinic. Kayleigh received her B.A. in Political Science and Peace and Conflict Studies from the University of California, Berkeley. Kayleigh also has experience working on international human rights issues and political campaigns.