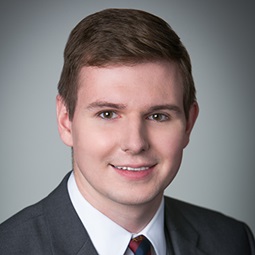 David F. Hill, IV is an associate in Weil’s Securities Litigation practice, where he focuses on the defense of shareholder derivative and class action litigation and other complex business disputes, as well as counseling with respect to shareholder demands and corporate governance. David also has experience in bankruptcy-related litigation, including contested matters and adversary proceedings.

David maintains an active pro bono practice, recently serving as the lead associate in a class-action federal prisoners’ rights case in the E.D.N.Y. David has been recognized annually on the District of Columbia Capital Pro Bono Honor Roll, with High Honors, since 2017.

Prior to joining Weil, David volunteered with the West Virginia Public Defender Corporation and the Defender Association of Philadelphia. During law school, David represented indigent clients in civil and criminal proceedings before WV Circuit and Magistrate Courts under attorney supervision. He received his J.D. from the University of Pennsylvania Law School, where he served as a Senior Editor of the University of Pennsylvania Journal of Constitutional Law, and his B.A., with High Honors, from Swarthmore College, where he was elected to Phi Beta Kappa.

David is an avid judge of American Mock Trial Association competitions and successfully competed in law school, forming part of the 2015 runner-up and 2016 championship teams at the John L. Costello National Criminal Law Trial Advocacy Competition, among others. He has also been a member of the Mercersburg Academy Alumni Council since 2017 and a Major in the Civil Air Patrol, of which he has been a member for more than fifteen years.

In 2020, David was recognized as a Rising Star in New York by Super Lawyers.