Weil has won two awards at IFLR1000’s inaugural United States Awards. The awards recognize “the most innovative U.S. deals and the best-performing law firms and lawyers across the states in 2019.”

Weil was also recognized for leading the landmark restructuring of Sears Holdings Corporation, named “Deal of the Year: Restructuring and Insolvency.” Sears was one of the largest retail chapter 11 filings in U.S. history and its restructuring culminated in the $5.2 billion going-concern sale of 425 Sears and Kmart locations to ESL Investments, Inc., saving a global retail icon and 45,000 jobs.

IFLR1000 selected the winners of the United States Awards based on extensive research, consisting of hundreds of submissions, client endorsements and interviews with attorneys industrywide. 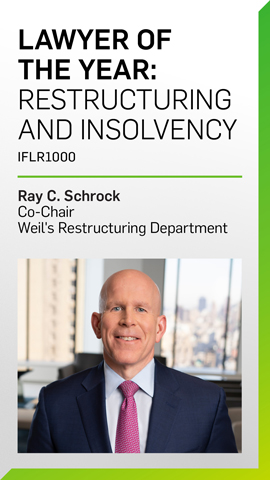