On June 14, 2016, Weil secured an important victory for the board of directors of lululemon athletica inc. in a stockholder derivative action alleging that the board failed to investigate alleged insider trading by Dennis J. Wilson, the founder and then chairman of the board of lululemon. Plaintiffs, lululemon stockholders, alleged that Mr. Wilson breached his fiduciary duties by selling a large block of lululemon stock shortly after learning about the resignation of Christine McCormick Day, lululemon’s Chief Executive Officer, and that the board breached their fiduciary duties by failing to investigate or take any action against Mr. Wilson relating to the trade.

The Delaware Court of Chancery dismissed the claims, holding that plaintiffs were precluded from pursuing their derivative claims in Delaware because similar claims had already been dismissed by a federal court in New York in an earlier-filed derivative action on the ground that the New York plaintiffs failed to make a pre-suit demand or allege demand futility with the particularity required by Delaware law – an action Weil also won, both in the Southern District of New York and the Second Circuit Court of Appeals.  The Court of Chancery rejected plaintiffs’ argument that their pursuit of books and records under Section 220 of the Delaware General Corporation Law before commencing their derivative action entitled them to pursue a second derivative action asserting what the Delaware plaintiffs described as a better pleading of the claims dismissed in the first derivative action.  The Court of Chancery stated that “it is certainly a better practice for stockholder plaintiffs to use ‘the tools at hand’” provided for by Section 220 “to thoroughly investigate derivative claims before filing suit” but that the New York plaintiffs’ “failure to do so … does not ... render them inadequate representatives” for preclusion purposes.

The decision – highlighted in a nationwide special alert by the Chancery Daily publication two hours after the decision was announced – stands for the important proposition that constitutional full faith and credit principles take precedence in our federalist system over state corporate governance law principles, a particularly significant result in light of the widely-publicized proliferation of multi-forum derivative litigation in recent years.

To read more about Weil’s April 2015 victory for the directors of lululemon in the related action before the Second Circuit, please follow this link. 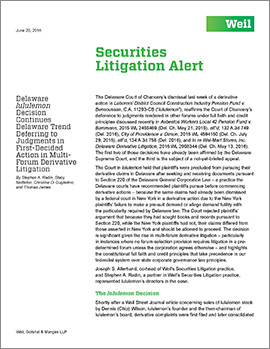 View a related Weil Alert on The Delaware Court of Chancery’s recent decision.