Weil has co-authored a second special report on solitary confinement of detainees entitled: “Seeing into Solitary II: A Further Review of the Laws and Policies of Certain Nations.” Following the first report published in 2016, the second report includes a study of the laws, policies and practices of solitary confinement of an additional 26 jurisdictions around the world.

The study, commissioned by the Former United Nations Special Rapporteur on Torture and the Cyrus R. Vance Center for International Justice, was completed on an entirely pro bono basis by Weil. Similar to the 2016 report, it provides a comparative analysis of different aspects of the practice of solitary confinement, such as its purpose and authorization; challenges and appeals concerning, and limitations on, its use; and accommodations, access to the outside world, and the use of physical restraints. Further, the second report also includes a comparative analysis of the implementation of the United Nations Standard Minimum Rules for the Treatment of Prisoners (the Nelson Mandela Rules). 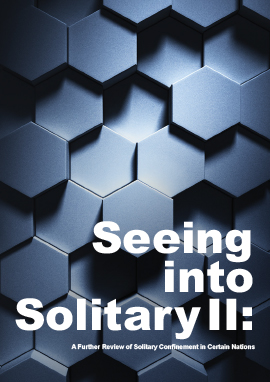 View “Seeing into Solitary II: A Further Review of the Laws and Policies of Certain Nations”