Weil was recently profiled by Law360 as a 2019 Class Action “Practice Group of the Year” for its role in some of the biggest cases in this area over the past year.

The profile highlighted the group’s role negotiating a $120M settlement for Willis Towers Watson ending claims related to the Allen Stanford Ponzi scheme, as well as a victory in the Eleventh Circuit to uphold the permanent dismissal of claims that Farmers Insurance and other insurers schemed to lower car repair costs.

Commenting on the Willis case, Jonathan Polkes, co-chair of Weil’s global Litigation Department, said: “It’s going to make settlements in multidistrict litigation and complicated class actions much more viable, and it’s going to make it harder for classes to opt-out and not play along with the group.”

In addition, the profile discussed Weil’s defeat of a multistate class action on behalf of Dometic Group. Weil was hired by Dometic after Ed Soto, co-head of the Firm’s global Complex Commercial Litigation practice, “blindly” wrote to Dometic’s general counsel advising that there was a better shot of defeating the litigation if the company focused on an anticipated Florida action that came later. Ed Soto said: “It’s that kind of knowledge of the distinctions of different circuits regarding what they’re doing with classes that made a difference in this case.”

David Yohai, partner in Weil’s Complex Commercial Litigation practice, noted the team’s experience representing clients of varying industries as “what separates us from our peers — [we practice in] not any one industry but rather across industries. I think that sends the message that we’re really good at this and we can do this in different spaces.”

Weil has a long track record of successfully defending high-stakes class actions across jurisdictions, industries and substantive areas of law – including antitrust, consumer fraud, employment and labor, ERISA, insurance, product liability/mass torts, and securities. The Firm also has an exemplary record trying these disputes to verdict, including most recently on behalf of C&S Wholesale Grocers in an antitrust class action that resulted in a complete defense jury verdict.

The profile also highlighted the Firm’s plans to continue investing in its Class Action practice by promoting and hiring attorneys with appellate experience. “I think we’re really set up nicely right now based on the investments we’ve made to hopefully be a dominant player in the space,” said David Lender, co-chair of Weil’s global Litigation Department. 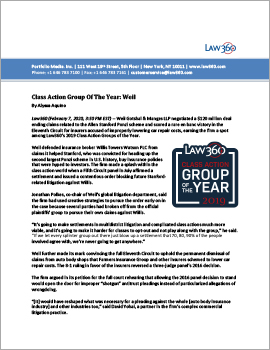