Weil was recently profiled by Law360 as a 2019 Bankruptcy “Practice Group of the Year” for its role leading some of the year’s largest and most significant bankruptcy filings.

The profile highlighted the group’s role guiding Sears through a $5.2 billion sale of 425 Sears and Kmart retail locations to ESL Investments. "Against all the odds we were able to sell the assets within 100 days," said Ray Schrock, Co-Chair of the Firm’s Business Finance & Restructuring Department and a member of Weil's team on the case. "A lot of people thought it was impossible, but we were able to get there."

Law360 also noted Weil’s ability to handle the most complex bankruptcies, highlighting the chapter 11 cases of Pacific Gas & Electric and Ditech Holding Corp., the largest and second-largest filings of the year, respectively. The group was also recognized for its global capabilities through its work on syncreon Group Holdings B.V.’s restructuring, which was effectuated through English schemes of arrangement and parallel recognition proceedings in the U.S. and Canada. This groundbreaking approach achieved a global balance sheet restructuring while avoiding the jurisdictional issues posed by a chapter 11 proceeding.

Department Co-Chairs Matt Barr and Gary Holtzer discussed ongoing trends in the market, commenting that bankruptcies are becoming even more rapidly paced, with creditors coming together into ad hoc groups sooner and sooner in a way that can catch debtors off guard. "The cases happen in a supernova fashion," Holtzer said.

With nine new partners added to the group in the U.S. over the last four years, Barr said the group has a "forward-looking" and "youthful" practice. 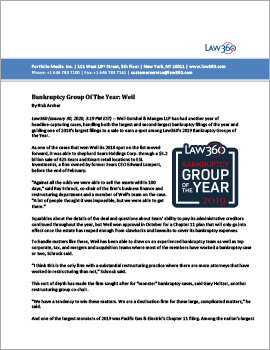