Weil was recently profiled by Law360 as a 2018 nationwide Bankruptcy “Practice Group of the Year” for representing some of the most iconic names in U.S. business history and parties in some of the largest bankruptcies of the year.

The profile highlighted the Firm’s representation of Sears in its chapter 11 cases, noting Weil’s role in advising the 126-year-old company in securing a $5 billion bid that is expected to keep 425 stores open and save up to 50,000 jobs. Commenting on the case, Business Finance & Restructuring Department Co-Chair Ray C. Schrock, P.C. said, “Sears has been a tremendously high-profile matter for the Firm, we’ve been able to showcase a lot of very strong aspects of the group.”

The Firm was also highlighted for handling many of the other largest bankruptcy and restructuring filings of 2018, including Westinghouse in its $9.8 billion chapter 11, and subsequently its $4.6 billion sale to Brookfield; Takata on its chapter 11 bankruptcy and completed $1.6 billion asset sale to Key Safety Systems; and Claire’s Stores Inc. in its chapter 11.

“I don’t think there’s any restructuring group in the market that has as broad a practice or as broad a market share across that practice,” Business Finance & Restructuring Department Co-Chair Matt Barr said. The practice group has the advantage of the assistance and advice of its Corporate, Tax and M&A teams, all areas that can easily arise over the course of a bankruptcy case.

Both Mr. Schrock and Mr. Barr said the success of the practice group could be attributed to having a top-notch restructuring team, which Mr. Barr described as “cutting edge,” and Mr. Schrock said was a “great young group.”

When discussing the future of the practice, the article noted that the Firm began 2019 by representing Northern California electrical utility Pacific Gas & Electric as it filed for chapter 11. Mr. Schrock commented that the Firm’s pipeline of work is bigger than it was last January, and Mr. Barr added, “I think people do believe this will be a busy year.” 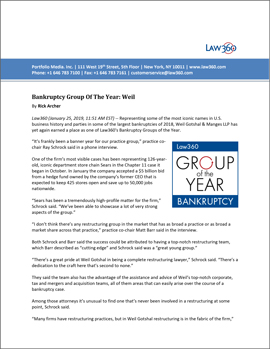