Weil was recently profiled by Law360 as a 2017 nationwide Securities “Practice Group of the Year” for securing victories in a string of high-profile securities litigation cases during the last year. This is the second consecutive year Weil’s Securities Litigation practice has received this honor.

The profile reports on the group’s broad experience and nationwide reach, singling out important victories in Colorado, Texas and New York federal courts, and the Delaware Supreme Court in 2017. Joseph Allerhand, Co-Head of the Securities Litigation practice, highlighted one of the common elements in our approach to these cases is a long tradition of collaboration. “We don’t function like many firms do, where you have a case and it’s your case and it’s never discussed with others. It is very common here that we challenge each other in terms of the approach we’re taking on the case,” he said.

As a chief example of this collaborative approach, Law360 highlighted Weil’s lead role in the successful defense, led by Litigation Department Co-Chair Jonathan Polkes, of more than 20 clients in an investor class action relating to the $22 billion sale of the Archstone-Smith real estate investment trust. In this case, Mr. Polkes, who was recently named a Securities MVP by Law360 for the second consecutive year, led a team that secured a case dispositive summary judgment ruling on the eve of trial in a ten-year-old case. John Neuwirth, Co-Head of the Securities Litigation practice, commented on the Archstone case: “It shows the incredible commitment of that team in delivering an excellent result at the end of a long litigation.”

In contrast, Law360 also focused on Weil’s ability to take charge of a complex case well in to the proceedings, including practice Co-Head Joseph Allerhand’s December 2016 victory for Kinder Morgan before the Delaware Supreme Court. Appointed as special appellate counsel after the Delaware Court of Chancery issued a $171 million trial verdict adverse to Kinder Morgan, Weil secured a reversal that upheld longstanding Delaware corporate legal doctrines. The Supreme Court held that the plaintiff – a limited partner in a partnership who alleged that the partnership overpaid for certain assets – lost standing to pursue derivative claims challenging the transaction when the partnership later merged with a third party. Mr. Allerhand noted: “It was a very innovative approach to focus on standing and tie it to long-term Delaware policies and not to try and fight [the case] on some of the findings of fact on the merits.”

Looking forward, Mr. Neuwirth said the practice will continue to be busy. “Our pipeline is full for 2018 and we look forward to delivering the same kind of exceptional results to our clients in 2018,” he commented. 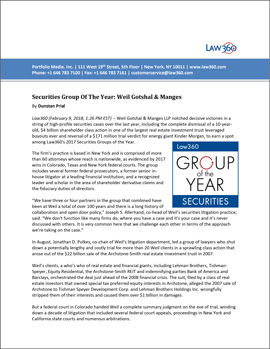