The profile highlights Weil’s ability to put together multinational deals, handling both a broad range of clients and a broad range of transactions. It reports that, in 2017, the group advised on 35 transactions greater than $1 billion for 23 different private equity sponsors, including numerous billion-dollar buyouts and exits, as well as record-setting fund formations. Partner Kevin Sullivan, Co-Head of Weil’s U.S. Private Equity practice, commented: "One of the practical things we're proud of is the number of sponsor clients," Mr. Sullivan said. "It's not just a few deals for some of these sponsors, it's a lot of deals."

Weil’s role in raising more than five significant funds for Brookfield Asset Management in the last 18 months alone, including a $14 billion infrastructure fund — one of the two largest ever raised, was also highlighted in the profile. Partner Doug Warner, Co-Head of Weil’s global Private Equity practice, commented on Weil’s capabilities relating to the formation of private investment funds, stating that it is a “very synergistic” practice. "We represent all kinds of funds," Mr. Warner said. "There's no corner of the market we don't play in."

With regard to the future of the group, Mr. Sullivan said that it remains bright. “I'm very bullish on the future," he said. "I think we have a strong team and will continue to grow." 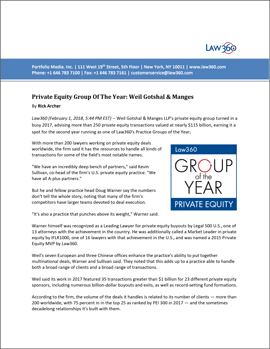