Weil was featured in an article published by the New York Law Journal for its pro bono representation of the Bergen Rockland Eruv Association in a dispute with three towns in New Jersey relating to the establishment and preservation of eruvs - symbolic enclosures significant to people of Jewish faith. Most recently, two of the New Jersey towns, Mahwah and Montvale, have settled. The third, Upper Saddle River, is still in the midst of ongoing discussions. These settlements protect and preserve the ability of the Plaintiffs and many observant Jewish families to enjoy the same religious freedom as so many others throughout Bergen and Rockland counties and beyond.

Weil partner Yehudah Buchweitz, who is leading the Weil team on this matter, was quoted throughout the article. Mr. Buchweitz highlighted the underlying discrimination evidenced by the dispute. “The cases that are brought to try to stop an eruv are never really about the eruv,” he noted. Mr. Buchweitz went on to explain that installation of eruvs in many other places throughout the country have gone smoothly. “What's remarkable about it is that, in almost all of them, there's been no dispute. There's a lot of parts of the country where, an eruv goes up and people say, ‘Oh, that's nice.’ It's another symbol of diversity,” he explained.

The article also highlights Mr. Buchweitz’s previous victories in a series of similar cases in the Hamptons section of New York that concluded in 2016 following a favorable opinion from the Second Circuit Court of Appeals, as well as Weil’s victory in a similar case in Tenafly, New Jersey that concluded in 2006 after the Supreme Court declined to hear the case following a ruling in Weil’s favor by the Third Circuit Court of Appeals. 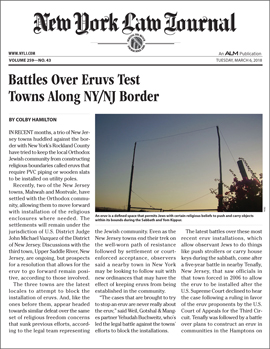