On August 25, 2017, Weil won a complete victory in a $4 billion investor class action when the U.S. District Court for the District of Colorado granted summary judgment on every count as to each of the more than 20 defendants, including Lehman Brothers, Tishman-Speyer, Equity Residential, the Archstone-Smith REIT, and the indemnifying parties. This was the last stop before trial, which had already been scheduled. As a result of this decision, the trial has been vacated, and all counts against all defendants have been dismissed.

This decision ends a 10-year litigation saga surrounding one of the largest REIT going private transactions in history – the $22 billion purchase of Archstone by the defendants, which occurred on the eve of the 2008 financial crisis. The litigation covered both the original going private deal, as well as the subsequent $16 billion asset sale by the buyers to Equity Residential (which plaintiffs tried to stop). The plaintiffs were real estate investors that owned special tax preferred equity interests in Archstone. The LBO allegedly blew up their tax benefits, underpaid them in the deal compared to other equity holders, and executed the deal in a manner that violated the governing charter of Archstone, in breach of fiduciary duties, and to the improper benefit of the buyers.

Weil ran all aspects of this litigation leading up to last Friday’s decision. It has included trips to the Seventh and Tenth Circuit Courts of Appeals, proceedings before four federal district court judges, three California State Court judges, a New York Supreme Court judge, and three arbitrations resulting in favorable arbitration decisions that were confirmed by three different courts. The Weil team traveled to depositions, hearings, and arbitrations in twelve states. At one point, it secured victories in two separate TRO hearings in two states over the course of two consecutive days.

The summary judgment decision was based on a massive record including about 80 depositions, one million pages of documents, and evidence provided by accountants, lawyers, and bankers. The Court held that nothing in Archstone’s governing charter or Maryland corporate law restricted Archstone’s authority to structure the merger as it did. In the end, the Court determined that there was “no genuine dispute of material fact that the terms of the 2007 merger were permissible, contrary to Plaintiffs’ position.” The Court also imposed costs on the Plaintiffs. 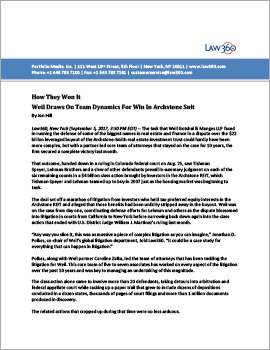 Weil Litigation Team Featured in Law360 “How They Won It” Series