As settlement in relation to Ukraine’s successful sovereign exchange offers is expected today, we explain why this sovereign deal is ground-breaking.

Weil has been advising the Ad Hoc Creditors’ Committee ("AHC"), which comprised Franklin Advisers, Inc., BTG Pactual Europe LLP, TCW Investment Management Company and T. Rowe Price Associates, Inc. on its negotiations with Ukraine as part of the restructuring of 14 sovereign and sovereign-guaranteed Eurobonds with an outstanding principal of approximately $18 billion.

Following eight months of negotiation, on October 29, 2015, Ukraine announced that, with the exception of the Russian series of bonds, the exchange offers were successful. Settlement of the new bonds and the GDP-linked securities for which the old debt is being exchanged is expected today.

Weil played a central role advising the AHC throughout this ground-breaking restructuring, which is critical to securing Ukraine’s ongoing stability and economic recovery.

The Weil team was led by restructuring partner Andrew Wilkinson with lead associates Kirsten Erichsen and Robert Peel and a team of lawyers across our London and New York offices. PJT Partners acted as financial adviser to the AHC.

View the full article: Ukraine’s Sovereign Restructuring: Why is this sovereign deal ground-breaking?

Additional information regarding Weil’s representation on this matter can be found on Weil's European Restructuring Watch and below:

Ukraine’s Sovereign Restructuring: Why is this sovereign deal ground-breaking? 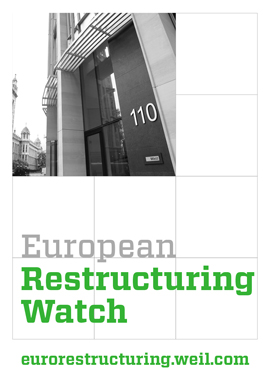