The American Bankruptcy Institute Commission to Study the Reform of Chapter 11 released its long-awaited, much-anticipated Final Report and Recommendations on December 8, 2014. Since the release of the Report, the Weil Bankruptcy Blog provided our readers with summaries of the most interesting and important issues addressed in the Report.

The ABI Commission was established in recognition of the “general consensus among restructuring professionals” that the time has come to evaluate U.S. business reorganization laws as a result of numerous changes that have occurred since the Bankruptcy Code was enacted in 1978. Some of the changes cited by the ABI Commission include the following:

The Commissioners, composed of some of the most prominent insolvency and restructuring professionals in the United States, undertook a three-year process that involved numerous meetings, the establishment of advisory committees, public field hearings, and substantial deliberations. According to the ABI Commission, no topics were off-limits, and a substantial reevaluation of the Bankruptcy Code was not only permitted, but encouraged. After the various advisory committees submitted comprehensive proposals based upon two years of research, analysis, and discussion, the ABI Commission prepared what is, in effect, a magnum opus directed to the industry and to Congress in support of meaningful reform of the current Bankruptcy Code. Notably, in proposing reforms to chapter 11 of the Bankruptcy Code, the ABI Commission necessarily included substantial analysis of, and proposals for, the other chapters of the Bankruptcy Code, insofar as they bear a material effect on the chapter 11 process.

Although the Report itself did not effect any specific changes to the Bankruptcy Code, only time will tell what, if any, action will be taken by Congress in response to this carefully crafted report.

Around the same time as the release of the Report, with the sudden downturn in oil and gas prices in the fourth quarter of 2014 and first quarter of 2015, the restructuring world (and the Weil Bankruptcy Blog) turned their eyes towards a sector that had experienced unprecedented stability for nearly half a decade. The Weil Bankruptcy Blog responded with a series of posts, titled “Drilling Down,” intended to help restructuring professionals better understand the unique challenges that arise when oil and gas law meets bankruptcy law. The four-part series provided an industry overview, discussed how specific oil and gas interests were treated in bankruptcy, considered the ability to assume or reject oil and gas leases under section 365 of the Bankruptcy Code, and looked at the unusual issues surrounding oil and gas leases on the Outer Continental Shelf.

We hope you continue to turn to the Weil Bankruptcy Blog as your primary resource for the most cutting-edge issues in restructuring and bankruptcy. Enjoy the Review. 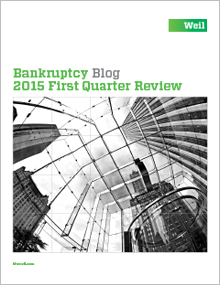