Corporate Chairman Michael J. Aiello has been recognized as one of the top M&A lawyers in the country by Insider. He is among 29 attorneys spotlighted as the best dealmakers in the industry, lawyers with the skill and expertise “to get business leaders where they want to go.”

The article noted Michael’s success advising Goldman Sachs, The Kroger Company, Ontario Teachers’ Pension Plan Board and Procter & Gamble, among other clients, on major transactions. It highlighted his work leading some of the year’s largest and most significant M&A deals, including advising MSP Recovery, LLC in its $32.6 billion business combination with Lionheart Acquisition Corp. II, a SPAC sponsored by Lionheart Equities. Insider also highlighted his previous role advising Dow Chemical Company in its $130 billion all-stock merger of equals with E. I. du Pont de Nemours and Company, and Dow’s subsequent $40 billion spin-off from DowDuPont Inc.

Michael is widely recognized as one of the foremost M&A attorneys nationwide. In 2020, he was named a finalist for “Corporate Lawyer of the Year” by The American Lawyer and a “Mergers & Acquisitions MVP” by Law360, among many other accolades. 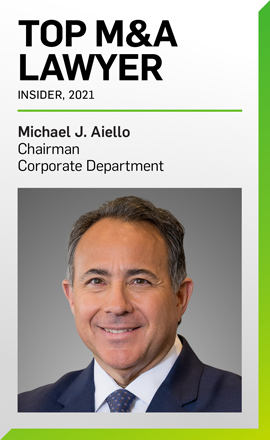