Global Private Equity practice Co-Head Marco Compagnoni has been named to the FN50 Most Influential 2020, Financial News’ list of the top private equity dealmakers, fundraisers and advisers in Europe.

Mr. Compagnoni is among just three outside counsel on the list recognizing individuals for their “firepower, track record and ability to shape the European private equity market.” The publication noted that Mr. Compagnoni has been at the forefront of the field for more than two decades and regularly advises leading private equity firms such as Advent International, Bain Capital, PSP Investments and Providence Equity on their most sophisticated transactions.

Financial News highlighted Mr. Compagnoni’s recent work advising the Barclay brothers in the sale of The Ritz Hotel, Clayton Dubilier & Rice in its acquisition of Conforama France, and Bain Capital in its acquisition of a 60% stake in Kantar from WPP. It also noted Mr. Compagnoni’s record of landmark deals, including his role advising Bain Capital and Advent in the 2010 purchase of Worldpay and its subsequent initial public offering – “one of the most successful European buyouts of all time.”

The accolade from Financial News follows Mr. Compagnoni’s recent recognition as the leader of the Weil team that won “Private Equity Team of the Year” at the Legal Business Awards 2020. 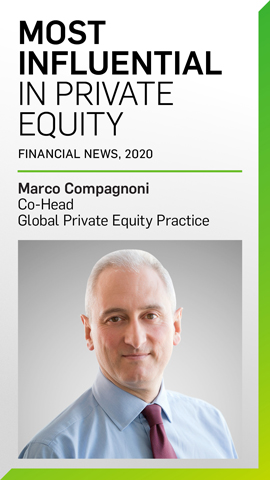