In a special supplement to NLJ published today, Jonathan Polkes is named among a group of litigators honored for their “deep passion and perseverance in pursuit of their mission” and their record of success.

Mr. Polkes is noted for representing National Insurance in a high-profile dispute with Puerto Rico relating to its municipal debt. In addition, the profile spotlighted Mr. Polkes’ recent Second Circuit victory for Marsh & McLennan that completely vindicated the company and provides corporations with a legal framework that supports terminating employees who refuse to cooperate with an internal investigation. “It articulated for the first time the underpinning of the practice,” he told NLJ. “It was very rewarding to help define, rationalize and explain the law.”

The profile also noted a resounding trial victory for Morgan Stanley – the bank’s first jury trial in more than a decade – in a rare private insider trading case brought by a Russian oligarch. 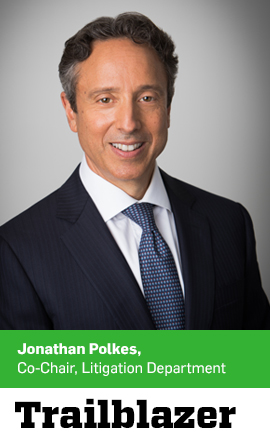