Justin D. Lee has been recognized as a Rising Star by the New York Law Journal, as part of the publication’s annual Professional Excellence Awards. He is among a select group identified as New York’s most promising attorneys under 40 who have excelled both in their practice areas and in service to the community.

A partner in Weil’s Banking & Finance practice, Mr. Lee advises institutional lenders, loan funds, asset managers and corporate borrowers on all types of bank financing transactions. His recent accomplishments include advising Goldman Sachs in $2.2 billion committed financing to support the $4.2 billion acquisition of Duff & Phelps by an investor consortium led by Stone Point Capital and Further Global; Morgan Stanley in providing $1.1 billion credit facilities for OUTFRONT Media; and Doncasters Group in the cross-border restructuring of its £1.22 billion in funded debt through an English scheme of arrangement.

The award reflects not only Mr. Lee’s transactional expertise but also his leadership in the legal community and his commitment to pro bono service. Mr. Lee has been a longtime leader of Weil’s Diversity & Inclusion program and is actively involved in its recruitment initiatives. In addition, Mr. Lee was instrumental in the recent launch of Weil’s comprehensive and inclusive family-building benefits program.

Mr. Lee, along with the other Rising Star honorees, will be profiled in the New York Law Journal’s upcoming Professional Excellence magazine and honored at the New York Legal Awards on October 27. 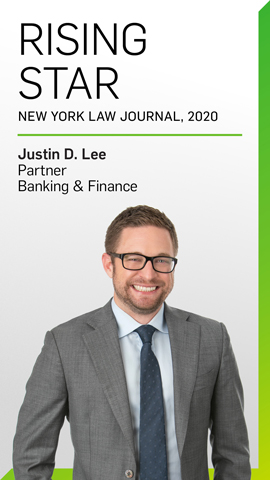