Restructuring partner Jenny Davidson has been named among the top 25 female lawyers under 40 in the U.K. in Legal Week’s annual Rising Stars 2022: The U.K.'s Best Up and Coming Female Lawyers list.

The ranked lawyers have been described as “paving ways in the U.K. legal industry and as the next generation of female legal powerhouses.”

Candidates were judged on the quality of their client base; examples of driving forward their practice area; the scale, significance and complexity of their deals; client feedback and general market reputation; the standing of their mentor; and examples of career success and innovation. 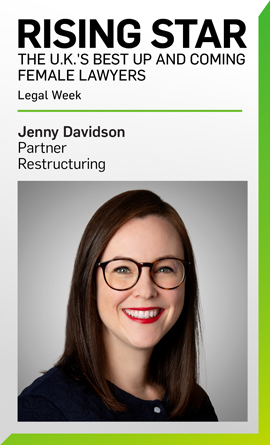