Senior partner Ira M. Millstein has authored The Activist Director: Lessons from the Boardroom and the Future of the Corporation, published by Columbia University Press (December 2016).

In The Activist Director, Mr. Millstein looks back at fifty years of counseling companies, nonprofits, and governments to actively govern their corporations and constituencies. From the threat of bankruptcy and the ConEd blackout of 1970s New York City, to the meltdown of Drexel Burnham Lambert in the late 1980s, to the turnaround of General Motors in the mid-1990s, Mr. Millstein takes readers into the boardrooms of several of the greatest catastrophes and success stories of America's best-known corporations.

His solution lies at the top: a new breed of activist directors who partner with management and reject short-term outlooks, plan a future based on growth and innovation, and take responsibility for corporate organization, strategy, and efficiency. What questions should we ask of potential board members and how do we know they'll be active? Mr. Millstein offers pragmatic suggestions for recruiting activist directors to the boardroom to secure the future of the corporation.

Ira M. Millstein is a senior partner of Weil, Gotshal & Manges LLP. He is an adjunct professor and founding chair of the Ira M. Millstein Center for Global Markets and Corporate Ownership at Columbia Law School and the author of several books, including The Recurrent Crisis in Corporate Governance (2003). 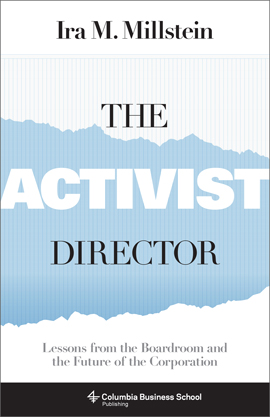 The Activist Director is available on Amazon.com.