In the Q&A style interview, Mr. Wolf discussed the state of the legal market and various aspects of Weil’s infrastructure, including the Firm’s culture, governance and strategy.

Mr. Wolf described Weil’s approach to client service saying, “our clients expect business partners, and we consider our commercial approach to the practice of law and the ability to think beyond legal issues to corporate strategy a key differentiator in this increasingly competitive market – and one of our greatest value-adds to clients.”

He emphasized the importance of Weil’s culture in its continued success, highlighting two of the Firm’s key distinguishing values – a spirit of entrepreneurialism and history of being a first mover. He noted numerous areas in which the Firm led the market: the development of a premier restructuring practice; opening in Silicon Valley in the early 90s to launch a patent litigation practice; the establishment of a private equity practice separate from M&A; and expanding in Europe by hiring the best local talent in respective jurisdictions, among other initiatives. These core values extend to the Firm’s commitment to diversity and inclusion, as Weil was among the first firms to implement affinity groups.

Mr. Wolf also shared his views on the successful development of millennials in the workplace as the next generation of talent. He stated that on-the-job mentoring and training for associates from partners is essential. He expanded, “Most importantly, you have to show the associates that you honestly and truly do care. You care about their training. You care about their development ... whether that’s becoming a partner at your firm or helping to place somebody with an important client … as a law firm, you must do it.”

Mr. Wolf concluded the interview with advice he would give his younger self and continues to give to others, including his children and colleagues:  “[J]ust do a great job, always impress people, and good things will happen.” 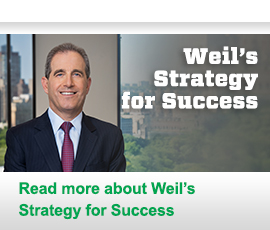