Weil Patent Litigation and Life Sciences practices Co-Head Edward Reines has been profiled among the “Top Intellectual Property Lawyers” in California for 2021 by the Daily Journal. Edward is among just 79 lawyers selected for this honor, one he has received numerous times, including in 2020.

Edward is one of the country’s foremost patent litigators, with deep ties to Silicon Valley and many of its technology pioneers. The publication noted his particular expertise in the field of genomics, where he has helped safeguard patents for breakthrough technologies, going back to the first successful efforts to map the human genome.

Daily Journal highlighted a series of victories – at trial and on appeal – that Edward recently secured on behalf of longtime client Illumina Inc. Teaming up with Weil Patent Litigation partner Derek Walter, he obtained preliminary injunctions against Illumina’s major competitor, Chinese conglomerate BGI, successfully preventing the company from launching its DNA sequencers in the U.S. and protecting Illumina’s market-leading technology.

The profile also noted Edward’s success representing Illumina before the U.S. Court of Appeals for the Federal Circuit in a multi-front patent dispute with Ariosa Diagnostics. He won Federal Circuit affirmation of a $27 million patent infringement jury verdict he secured against Ariosa in 2018 relating to Illumina’s revolutionary non-invasive prenatal genetic test. On another recent occasion, Edward successfully challenged a trial court’s summary judgment order invalidating Illumina’s patent claims relating to DNA tests for Down syndrome. That appellate victory for Illumina broke new ground in the fast-evolving area of patent eligibility under Section 101 of the Patent Act.

Daily Journal also highlighted Edward’s repeated achievements on behalf of Bio-Rad Laboratories Inc. and the University of Chicago in a patent infringement suit brought against competitor 10X Genomics. After securing a $24 million patent jury verdict and a permanent injunction against 10X, Edward again prevailed at the Federal Circuit, winning affirmation of the remedies.

The profile noted that Edward was drawn years ago to the dynamism and inventiveness of the Life Sciences sector, and continues to focus on genomics and other cutting-edge technologies shaping the future of medicine. 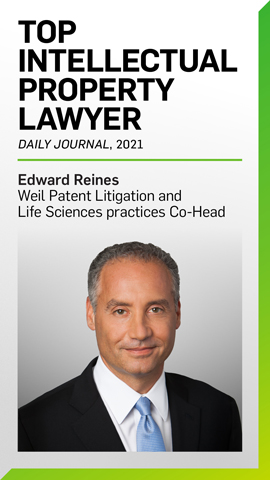