Patent Litigation and Life Sciences practices Co-Head Edward Reines has been named among the “Top 100 Lawyers” in California for 2021 by the Daily Journal.

Edward is one of the country’s leading patent trial and appellate litigators and has particular expertise in the field of genomics. The profile focused on his longstanding ties to biotech pioneers, his success in protecting their cutting-edge technologies and the impact he continues to have on an evolving area of law.

The publication highlighted a series of victories that Edward recently secured on behalf of Illumina Inc. at trial courts and on appeal. Teaming up with Weil Patent Litigation partner Derek Walter, he convinced the U.S. Court of Appeals for the Federal Circuit to uphold the invalidation of five Columbia University patents by the Patent Trial and Appeal Board. Separately, Edward obtained preliminary injunctions against one of Illumina’s major competitors, Chinese conglomerate BGI, successfully preventing the company from launching its DNA sequencers in the U.S. and protecting Illumina’s market-leading technology.

The profile also highlighted Edward’s success in challenging on appeal a trial court’s summary judgment order invalidating Illumina’s patent claims relating to DNA tests for Down syndrome. That Federal Circuit victory for Illumina broke new ground in the fast-evolving area of patent eligibility under Section 101 of the Patent Act.

“Courts had been unfriendly to patents in the biotech space,” Edward told the Daily Journal. “This was an important decision over a patent for preparing DNA.”

Edward’s selection to the “Top 100 Lawyers” follows his recognition from the Daily Journal as one California’s “Top Intellectual Property Lawyers” in 2021 – an honor he has received on multiple occasions dating back to 2008. 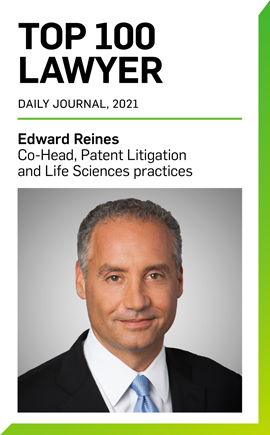