Complex Commercial Litigation practice Co-Head Drew Tulumello has been recognized as a “Sports Trailblazer” by The National Law Journal. He was among 30 attorneys honored nationwide and profiled in a special supplement for their respective achievements in sports, gaming and entertainment law.

“I have tried to give voice to college athletes in their challenge to the NCAA's antiquated amateurism rules and to the U.S. Women's National Team in its suit for equal pay,” Drew said. “Our goal is to help courts understand the athlete's perspective in the tradition of a ‘Brandeis brief.’”

In addition to his sports law practice, Drew regularly represents clients in a broad spectrum of complex litigation at the trial and appellate levels, as well as in connection with government investigations. He also regularly counsels companies on global legal strategy and best practices for litigation risk management in rapidly changing regulatory environments.

Drew is the 30th Weil partner since late 2015 to be named a “Trailblazer” in their respective field of expertise. 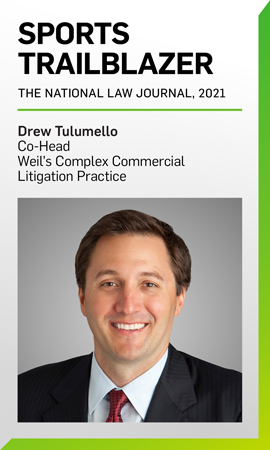