Weil Patent Litigation partner Derek Walter has been profiled in Law360 as a 2020 Life Sciences MVP. He is one of just five attorneys industrywide recognized for outstanding achievements and contributions to the practice area over the last year.

The Q&A profile highlighted Mr. Walter’s role in securing a resounding victory on behalf of Bio-Rad Laboratories and the University of Chicago in a patent infringement suit brought against competitor 10X Genomics relating to groundbreaking genetic testing methods. After winning a $24 million patent jury verdict and a permanent injunction for Bio-Rad, Mr. Walter prevailed on appeal, with the Federal Circuit upholding both the full damages award and the permanent injunction against virtually all of 10X Genomics’ infringing products.

"Because I played a role not just in the district court but also in the patent office before [the Patent Trial and Appeal Board] and also the reexamination unit, it shows the breadth of what I'm able to do," Mr. Walter said. "It's also just very, very challenging these days to take a case and get it to verdict and get the result affirmed."

The profile also highlighted Mr. Walter’s success for Bio-Rad at the Patent Trial and Appeal Board, where he defeated an inter partes review proceeding instigated by Agilent Technologies that challenged a patent covering widely used genomics instruments.

In addition, Law360 noted the ways that Mr. Walter’s Ph.D. in chemistry has helped him excel as a leading-edge patent litigator. However, nothing has proved more valuable than his personal commitment to his clients.

"My primary motivation is I want to do a good job for my clients. I want to make sure they're happy. If you focus on that, the rest will fall into place,” Mr. Walter said. “Lucky for me that's worked out." 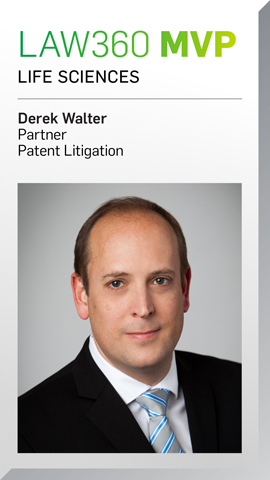