Restructuring partner Candace Arthur has been recognized by Bloomberg Law as one of the top young bankruptcy lawyers currently “raising the bar” in the practice area.

Ms. Arthur has been profiled in Bloomberg Law’s series “They’ve Got Next,” which spotlights “five young lawyers to know in the world of bankruptcy.” The profile noted Ms. Arthur’s expertise and leadership in complex chapter 11 restructurings, and emphasized her ability to provide innovative and effective solutions to the most challenging problems.

“At the end of the day you’re a problem-solver,” Ms. Arthur told Bloomberg Law. “I try not to make things black and white because I don’t think the bankruptcy code is black and white.”

Bloomberg Law highlighted Ms. Arthur’s work with J.Crew in its recent chapter 11 restructuring that allowed the iconic retailer to convert more than $1.6 billion of debt into equity, raise over $400 million in new financing and preserve its workforce. The profile also highlighted her previous role in J.Crew’s groundbreaking out-of-court restructuring that transferred intellectual property to an unrestricted subsidiary for use as collateral for new securities issued as part of the debt exchange.

“‘It was really taking a fresh approach,’ Ms. Arthur said. It was so innovative, in fact, that ‘getting J.Crewed’ soon became used in bankruptcy circles as a verb.”

Ms. Arthur also excelled while working on the Great Atlantic & Pacific Tea Co.’s chapter 11 case, a complex proceeding in 2015 that involved the sale of more than 300 store locations in a one-day auction, Bloomberg Law reported.

Restructuring Department Co-Chair Ray C. Schrock recalled how Ms. Arthur demonstrated her legal acumen and leadership in that case, including taking the podium, without notes, and flawlessly laying out arguments complete with legal references and citations that rebutted objections from stakeholders.

“People never have a bad word to say about Candace,” Mr. Schrock said. “She’s a really fantastic lawyer, and an even better person.”

The profile noted Mr. Schrock’s importance as a mentor to Ms. Arthur, and how she now focuses in turn on developing the careers of Weil’s talented associates.

“He saw a lot of things in me early on and he supported that,” Ms. Arthur said. 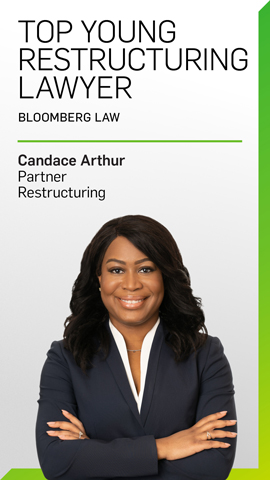